James Housden from Preston is running a half marathon to raise awareness of the plight of Far East prisoners of war in World War Two. Monday 15th August sees the anniversary of Victory in Japan (VJ Day) and is an important date to James as that was the day his grandfather became a free man again. 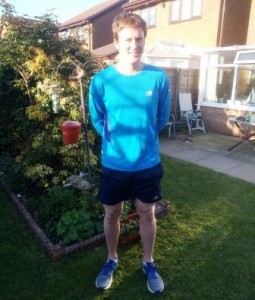 The charity is fundraising to replace the computer equipment at the FEPOW Memorial Building. The Memorial Building has many computer generated displays to enhance the visitor experience, but most of the equipment is now 11 years old and desperately needs replacing.

James is the son of COFEPOW trustee Paul Housden and last year completed the Coast-to-Coast cycle ride with his Dad to raise money to help COFEPOW commemorate the 70th Anniversary of VJ Day, when Japan finally surrendered, brining an end to the Second World War.

James said: “My Grandfather was one of the lucky ones who returned after being a prisoner of war. The story of all the captives is told at the National Memorial Arboretum and, by raising funds to help replace the outdated computer equipment at the Far East POW Memorial Building, I can help keep alive the memory of what my Granddad and his fellow captives went through. It is really important that future generations remember what happened during the Second World War.”

If you would like to sponsor James, please visit https://www.justgiving.com/fundraising/james-housden2 and to find out more about the Far East Prisoners of War visit www.cofepow.org.uk.