It must be about 16 years since I was last at the Centre for Alternative Technology (CAT)  near Machynlleth in Mid Wales.

For those that don’t know of it, it’s a pioneering education charity based in a former slate quarry, which has used the site to trial a number of alternative technologies over the years, and today it is using many of them still to power the site.

When I visited the Centre for Alternative Technology in the early days of Ethos public relations it was to discuss an ethical online web portal, which one of our clients was involved in. Times have certainly changed as far as the internet is concerned and, no doubt, that’s true in the field of alternative energy technologies too. 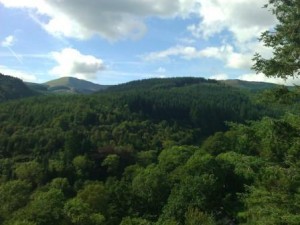 I remember arriving at the site of CAT the first time, after a beautiful train journey from Manchester, and being impressed by the water-balanced cliff railway which takes you from road level up to the visitor centre.

As with many of the technologies showcased at CAT, the cliff railway works using the simplest of technologies, namely gravity. The two carriages are linked by a steel rope and when one goes down due to the combined weight of its passengers and water tank, the other carriage travels up the cliff face, with some stunning views.

On my recent visit, another ancient technology was being displayed, though with a modern twist. Burning wood for cooking and heating can hardly be described as an alternative technology, given that millions of people around the world rely on it day in and day out, but at CAT there is an innovative display of boilers that use wood pellets to produce both electricity and heat. Obviously, managed properly wood is a sustainable fuel and so provides an alternative to fossil fuels. If we want to work towards a zero carbon economy, then this might be part of the solution.

For many years, I have thought that solar panels for domestic and industrial premises should be fitted as a matter of course instead of roofing tiles, rather than on top of an existing roof. At CAT, that’s what they have on the café. 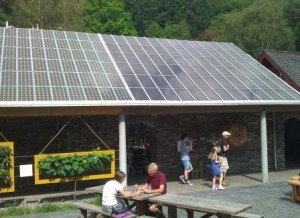 Over the past 16 years many things have changed dramatically in the field of low carbon energy generation, whether that is the growth of offshore wind energy generation or the increasing number of homes with photovoltaic cells on their roofs, but what we still have not seen is a widespread belief in using alternative technologies from the start of a project rather than as an add on.

But there still seems to be a lot of antipathy to wind and solar, in spite of their obvious benefits. Ethos public relations has worked with community biodiesel and community wind energy operators in the past and have, in a very small way, helped get the message out about the benefits of reducing carbon dependency. There is still much to be done.

So keep up the good work CAT, keep promoting the alternatives and helping to put sustainability into practice…