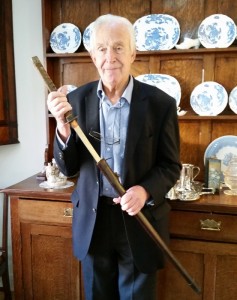 COFEPOW member Patrick Toosey with a Samurai sword brought back by his father.

COFEPOW, a national charity dedicated to keeping alive the memory of prisoners of war held in the Far East in World War Two, is asking people to hunt out any mementoes or artefacts passed down by parents and grandparents from their time in captivity.

2015 sees the 70th anniversary of the end of the Second World War in Japan and COFEPOW, a charity set up to perpetuate the memory of Far East Prisoners of War and raise awareness of the suffering they endured, is keen to track down any artefacts such as letters, photographs or diaries brought back from the Far East by prisoners of war.

COFEPOW (Children and Families of Far East Prisoners of War) was founded by Carol Cooper, the daughter of a prisoner of war who discovered her father’s wartime diary advertised for sale and decided to set up a charity to keep alive the memories of Far East prisoners of war (FEPOWs).

Seventy years on from VJ Day, the charity wants to make sure as much precious material as possible is recorded to commemorate this important anniversary, to help recognise the enormous contribution made by individual FEPOWs. So, COFEPOW is now looking for local people who might have almost forgotten artefacts hidden away.

Says Keith Andrews of COFEPOW: “Many of us have artefacts and mementoes stored away that were passed down by our parents and grandparents from their time in the Far East. We want to find more of these valuable artefacts to record them for future generations, and that is why we asking local people to help.”

COFEPOW member Patrick Toosey from the Wirral is backing the initiative: “When my father, Brigadier Toosey, returned from the Far East he brought back a Samurai sword from one of his Japanese captors. When I was a child, my father didn’t mention the war and what he went through, but this sword is now a permanent reminder to me of his suffering.”

Keith added: “The artefacts people have are often not valuable in financial terms, but they do mean a great deal to the families of prisoners of war. Anyone interested in letting us know what they have will be helping us preserve this valuable archive material for the future.”

If you would like to help or to find out more, please visit http://cofepow.org.uk/pages/appeal_keeping_memories_alive.htm