Janet Redler Travel & Tourism in Shrewsbury has been shortlisted for this year’s UKInbound Awards for Excellence, the leading awards for the UK inbound tourism industry. 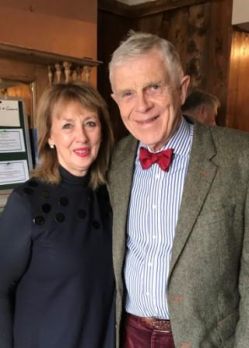 2019 has been a huge year for Janet Redler Travel & Tourism, including seeing their team expand to meet growing worldwide demand and taking on additional offices at their Shrewsbury base.

The shortlist was selected by an independent panel of industry experts, and members of UKInbound will now have the chance to vote for their winners. UKInbound is the trade association that represents the UK’s inbound tourism – the sixth largest export industry and third largest employer in the country.

Janet Redler Travel & Tourism specialises in delivering tailor-made, personal and luxury tours of the UK. With over 30 years’ experience, Janet and her team work with travel agents, organisations and individuals to arrange customised travel for clients all over the world.

The annual awards celebrate the best of inbound tourism and nominations are for those businesses which have made a significant contribution to the UK’s inbound tourism industry over the past 12 months.

Janet Redler, Chief Executive of Janet Redler Travel & Tourism, said: “We are delighted to be shortlisted for the leading awards in our industry, demonstrating the strength of the inbound tourism industry across the UK regions and shining a light on our fabulous town of Shrewsbury.

“2019 has been a momentous year for us, as we have welcomed many more clients from different parts of the world. 2020 is set to be even bigger and better, with some incredible specialist tours in the pipeline, including three quilting tours and a large-scale trip from the US which will allow over 200 travellers from North America private access to Stonehenge.

“Two years ago, we were delighted to be chosen for the Tour Operator of the Year category; this time we are hoping to go one better and win Regional Member of the Year.”

The wide range of tours offered by Janet Redler Travel & Tourism has continued to grow, including specialist garden tours, wine and food tours, heritage, academic and music tours. They have also welcomed increasing numbers of independent travellers and small groups from North America, allowing them to showcase the best that Great Britain and Ireland have to offer.

This year, Janet’s son and daughter-in-law have relocated to Shrewsbury to join the team, helping to ensure that the warm family feel that Janet Redler Travel & Tourism is known for continues.

Janet was also delighted to welcome Kat Colling on board, to bring innovative ideas to the business and to assist with future growth. Kat is an experienced UK tourism professional, director of two UK tourism-focused businesses and 2018’s Young Person of the Year at the Wales Tourism Awards.

The winners will be announced at a gala dinner at Aerospace Bristol – the home of the legendary aircraft Concorde – on Thursday 6 February 2020 as part of the UKInbound Annual Convention.