The Starfire Singers, a Methodist youth choir from the United States with an international reputation, are touring the UK this summer and will be performing at a number of venues to raise funds for charity. 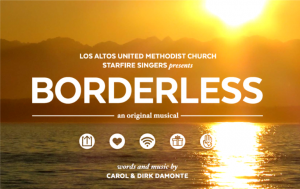 Every few years, the Starfire Singers embark on a summer tour of the UK, arranged by our client Janet Redler Travel & Tourism. The Starfire Singers sing in worship at Los Altos United Methodist Church in Northern California and their musical productions tackle social issues from a Christian perspective. In July and August 2017, they will be performing the original musical Borderless at venues across the country to raise money for local charities.

Borderless is about confronting the places where people feel stuck in life, where people feel trapped by all the demands placed on them by internal and external pressures, and finding a path towards living beyond those borders. The performances include music, song, dance and multimedia.

Janet Redler, Chief Executive of Janet Redler Travel & Tourism, which is arranging the tour, said: “We are delighted to welcome the renowned Starfire Singers to the UK once again. Their thrilling musical production Borderless is sure to entertain audiences around the country while also addressing social issues. The tour will help to raise funds for a number of charitable projects and we would like to welcome people along to enjoy a wonderful evening of entertainment.”

Funds raised from the performances will be donated to a number of charities and Methodist Church initiatives including the New Room Bristol Development Fund, the Open Doors Project at Wesley Memorial Church in Oxford and the Southern Area Hospice in Northern Ireland.

To find out more and for booking details, please visit http://www.janetredlertravelandtourism.co.uk/tours1/starfire-tour-2017/.