For over 20 years, Ethos public relations has described itself as an ethical PR agency. We might not have known it back then, but what we were really saying was that we were against ‘fake news’.

In recent years, a number of things have contributed to the term fake news being bandied about, almost every time someone disagrees with some information or an editorial stance. This is not at all useful and is only going to increase mistrust of information and expert opinion.

In the PR context, what we meant by ethical PR was not engaging in spin but focusing on the real news behind a story. For many clients, especially in the charity and social enterprise sectors, this is particularly important as they have meaningful stories to tell supporters and funders and we believe this is best done with real, honest case studies and stories that demonstrate the real impact of their work.

Back in the 1980s it wasn’t fake news that made us develop our honest approach but rather spin and ‘kiss and tell’ stories.

Unfortunately, the transformation to fake news from this was almost inevitable and was supported in part by some bad editorial decisions by the media along the way.

It’s easy to blame editors, but a free media does need to be protected, and probably almost everyone working in public relations can cite examples of where really interesting, pertinent and newsworthy press releases have gained no coverage, while less socially useful information gets on air or in print.

Journalists aren’t social workers, but they do need to take a responsibility to their community and reflect what is going on in a balanced and holistic way. We have always subscribed to – and done our best to adhere to – the NUJ principles in our dealings with the media.

In a pre-digital age it was true that air time and newspaper space was limited, but that’s hardly the case now. Real, good quality and verifiable news should be able to find an outlet on trusted media sites to balance the seemingly endless rise of so called ‘news’ sites peddling opinion as fact. 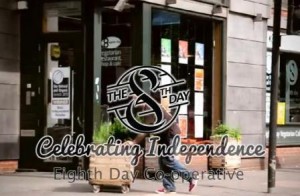 Our client Eighth Day has gone live with a new video which was directed by Ethos public relations and filmed by Andreas Andrews Photography.

Eighth Day decided to commission a video for their website, which was filmed during Independents’ Day, an annual event to promote the UK’s independent retailers, to showcase the breadth of products and services they offer.

Eighth Day café and shop on Oxford Road in Manchester stocks what is arguably the largest selection of organic and natural vegetarian and vegan foods in the North West. It has been trading for over forty years and was recently been awarded ‘Best Independent Retailer’ in the Natural & Organic Awards 2013.

Ethos public relations has over 16 years’ experience of offering communications, marketing and media relations services to a wide range of clients and we have produced a number of online videos. To find out more about our video production services and to see other videos we have produced click here.

An online video is a great way for your organisations to share its key messages and an informative, well-produced and fun video can really engage your key audiences.