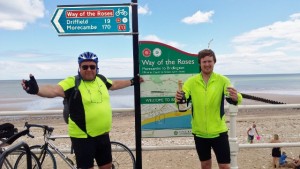 A father and son from Preston have raised over £1, 000 for national charity COFEPOW by successfully completing a cross country cycling challenge.

Paul Housden and his son James cycled across Lancashire and Yorkshire from Morecambe to Bridlington to raise funds for national charity COFEPOW, which is dedicated to keeping alive the memory of prisoners of war held in the Far East in World War Two.

As well as raising funds for the charity, Paul and James wanted to highlight the suffering of the Far East prisoners of war, as this year sees the 70th anniversary year of Victory in Japan (VJ) Day. More than 200,000 Allied civilians and service personnel were taken prisoner by the Japanese and by VJ Day, on 15 August 1945, some 50,000 of these people had died.

Paul says: “We’re very pleased to have successfully completed the Coast to Coast cycle ride. Day one was very challenging as it poured down for 55 miles across the Pennines, but day two was much better with a nice breeze from behind and only a couple of showers.

“I came off my bike once and finished up with some cuts and bruises, but I survived. I thought about what happened to my Dad in the war and that stopped me feeling too sorry for myself.”

Paul Watson from COFEPOW says: “We are delighted that Paul and James got from Morecambe to Bridlington by bike and we can’t thank them enough for raising funds for COFEPOW. The money collected will go towards building a memorial garden for Far East prisoners of war at the National Memorial Arboretum in Staffordshire. We would also like to thank all those who donated and supported them.”

Paul Housden adds: “My Father was a POW in the Far East and it is hard to imagine just how much he and thousands of others suffered. COFEPOW exists to ensure this important part of history is kept alive. What we went through on the cycle ride was a small effort compared to what my Father and many others like him went through in World War Two.”

The 70th anniversary of VJ Day takes place on 15 August 2015 and there will be a number of events taking place around the country to commemorate this important occasion.

There is still time to sponsor Paul and James by visiting https://www.justgiving.com/Paul-Housden and to find out more about Far East Prisoners of War visit www.cofepow.org.uk.