A father and son cycling duo from Lostock Hall, Preston are cycling across England to raise awareness of the plight of World War Two prisoners of war. 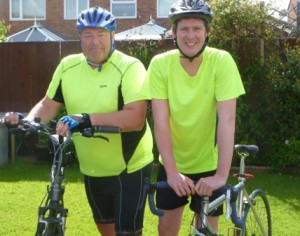 Paul and James Housden are cycling for COFEPOW

Paul Housden and son James are cycling across Lancashire and Yorkshire from Morecambe to Bridlington to raise funds for national charity, COFEPOW, which is dedicated to keeping alive the memory of prisoners of war held in the Far East in World War Two.

More than 200,000 allied civilians and service personnel were taken prisoner by the Japanese in February 1942. By Victory in Japan Day some 50,000 of these people had died.

Says Paul: “My father was a POW in the Far East and it is so hard to conceive what he and thousands of others went through. COFEPOW exists to ensure this important part of history is kept alive.”

Son James is keen to help raise funds for COFEPOW as away of recognising his grandfather’s contribution: “Having listened to dad talk about some of the things granddad and his fellow captives went through, it’s very important that the coming generations have knowledge of what happened to the forgotten army.”

The ride, which will take two full days of cycling across the Lancashire and Yorkshire dales and moors, and says Paul: “We will face a total climb of 4,222 ft and some 141 miles, but compared to what my Father went through, it is a small effort to pay tribute to him and his fellow POWs.”

If you would like to sponsor Paul and James, please visit https://www.justgiving.com/Paul-Housden and to find out more about Far East Prisoners of War visit www.cofepow.org.uk.