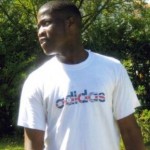 We are very pleased to announce that we will be working with The Godwin Lawson Foundation, to launch the charity and help communicate its important anti-knife crime message.

In 2010, 17 year old Godwin Lawson was walking home with his friends in North London when they were attacked by a group of men. The attack was unprovoked and when Godwin went to help his friends he was stabbed in the heart. He sadly died at the scene.

His parents, Yvonne and Calvin, have set up the Foundation not only as a tribute to their son, but also to draw attention to the way some young people get drawn into gangs because of the postcode area they live in.
The Godwin Lawson Foundation will invest in young people who want to be a part of positive community initiatives – and help to ensure that they arrive home safely afterwards.

Godwin was a promising footballer and was offered a two year scholarship by the Oxford United Football Academy. Now Yvonne, Calvin and Godwin’s friends are using sport to break down barriers between people across London.

The charity is aiming to hold an annual Peace March in North London to draw attention to the dangers of knife crime as well as fundraising football matches in remembrance of Godwin.

We are looking forward to helping Yvonne and the team raise the profile of the Foundation and this really important issue over the next few months.