The latest edition of Credit Union News, which we have been working on for our client ABCUL, has been published. This special edition celebrates the 50th Anniversary of credit unions in Britain. 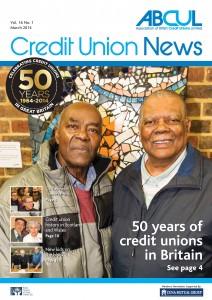 There is also a look ahead to the future, with a feature on some of the “new kids on the block”: Polish Credit Union UK, Churches Mutual Credit Union and Retail Credit Union are three new credit unions taking the sector forward.

The magazine goes out to ABCUL members and many others with an interest in the credit union sector and is published three times a year. A copy of the latest issue can be downloaded from our publications page.